Acquiring a vast amount of Modbus serial data in Ethernet-based SCADA systems can be complex and challenging for engineers. Besides an easy-to-use protocol gateway solution to convert between Modbus serial and Modbus TCP protocols, engineers need an efficient method to shorten the data acquisition time from a large numbers of serial devices in order for large-scale networks to operate fast and smoothly.

In large-scale critical applications, such as power monitoring systems, SCADA systems cannot afford to wait for field devices to send their response to simultaneous data acquisition requests one by one. Imagine 300 serial meters in the field, and only one Modbus gateway is being used to retrieve data—it would take at least 30 seconds to finish a polling cycle, which is unacceptable because it would not be easy to track the data trend or analyze failure. 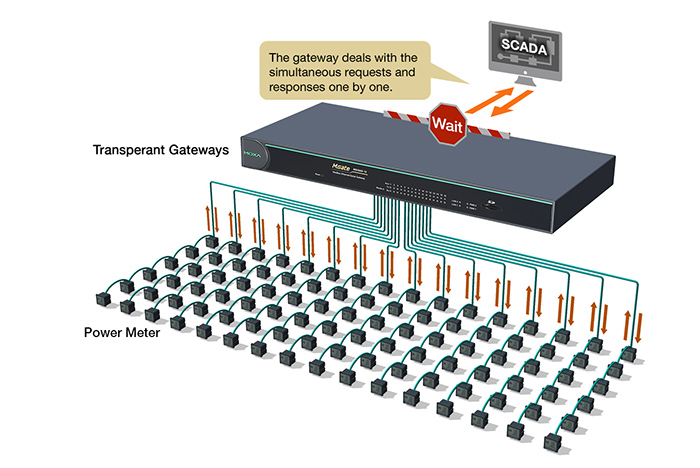 Moreover, a three-to-five-second polling cycle is a common requirement. Thus, engineers will normally consider deploying multiple Modbus gateways in order to shorten the polling cycle. However, it is a costly endeavor, and the better performance a network requires, the more Modbus gateways are needed. Engineers, consequently, face this dilemma: either increase the budget to achieve the requirements or tolerate low-speed serial data acquisition attributed to the traditional polling mechanism.

Active polling, designed to overcome the shortcomings of the traditional round-robin polling mechanism, allows each side of the gateway to conduct communication independently from each other. On the one side, each serial port of the gateway acts as a Modbus RTU master, actively polling the Modbus RTU slaves such as power meters; on the other side, the gateway functions as a Modbus TCP server, polled by the SCADA system. An all-important feature of gateways that support active polling is an internal memory that facilitates seamless data retrievals. 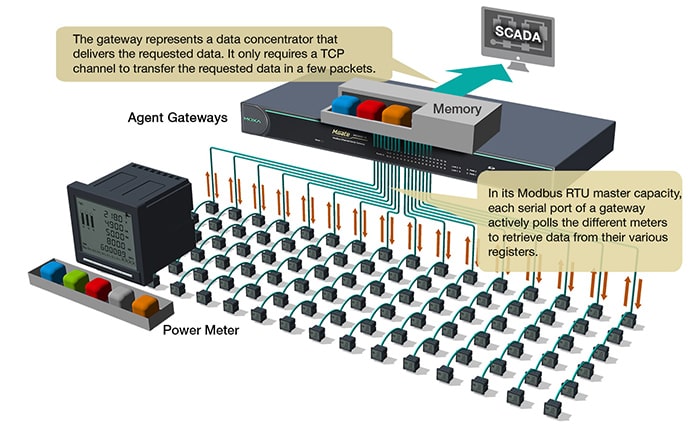 Active polling presents several advantages. It makes the polling cycle 10 times faster than the round-robin polling mechanism. Only the duration of the Modbus TCP request and Modbus TCP response make up the scan time as the SCADA system does not need to wait on the Modbus RTU leg of the polling process.

Another benefit is that active polling allows all the data generated by the devices to be transferred in a few packets. From the SCADA system's vantage point, the gateway represents a data bank that delivers the requested information. In its capacity as a Modbus RTU, each serial port of the gateway actively polls different meters to retrieve data from their various registers. The collected data is continuously stored in the gateway's internal memory. It only requires a TCP channel to transfer the requested data in a few packets instead of setting tons of commands in SCADA.

The key to the success of a newly designed system is a gateway that boosts a SCADA system's performance, increases the flexibility of a SCADA program's design, and enables easy configuration. In agent mode, the gateways support the active polling mechanism to improve SCADA performance. Furthermore, the gateway can implement many Modbus commands in its capacity as RTU master. Although such a capacity provides a lot of flexibility when it comes to the design of the system, it unfortunately increases the configuration tasks. In order to save time with configuration, gateways that support comma-separated value (CSV) files, which can be easily configured and imported into the gateway by using MS Excel, are definitely a great benefit, especially for deployments of a large scope.

Unlike newly designed systems, expanding existing systems requires a fast and smart way to add new devices while keeping the same polling performance, or even achieving a better one. With intelligent mode, gateways can automatically learn the Modbus commands from SCADA systems without additional command settings required, as in the case of agent mode. Gateways can use active polling to act as a Modbus master in each serial port. It is a helpful function for those systems that are already running for a period and have regular command requests.

Moxa’s MGate MB3660 Modbus gateways are high port density protocol gateways and feature an innovative active polling mechanism that include both agent mode and intelligent mode, making your data acquisition 10 times faster compared with traditional mechanisms, no matter whether you are designing a new system or expanding an existing one.

Easy World's Moxa's official distributor in the Middle East. For any further information please contact us via sales@eworldme.com. 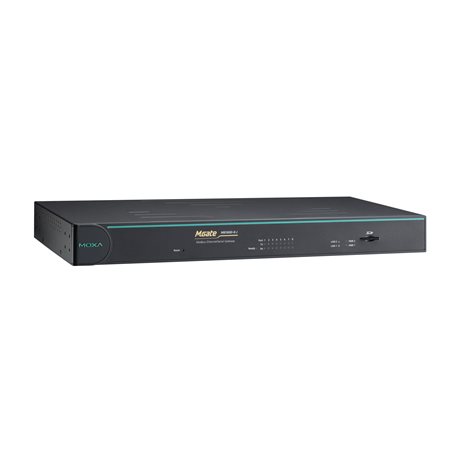